September 26, 2013
The bathroom has been driving me crazy.  Since moving in we've had to replace a the running toilet, fix the shower that was leaking into the basement and unclog the tub drain.  I've been really tempted to just rip out the whole bathroom and start over, but currently it's our only bathroom and our plans for an addition make it impossible to build the basement bathroom just yet.
So for now we're stuck with this bathroom but I just couldn't handle the green walls and ceiling any longer. 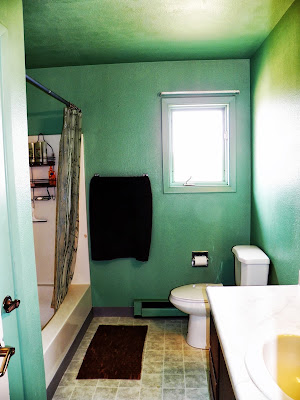 I had some ceiling paint left over from the last house and I found a half-gallon for antique white paint in the basement for the walls.  I made a curtain out of a spare shower curtain from a previous house. 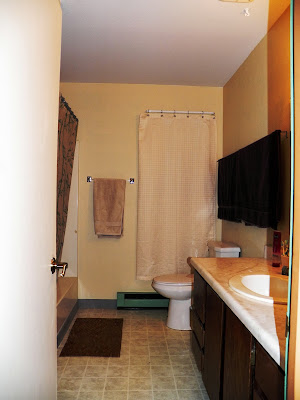 Luke still doesn't like the color (anything but bright white looks dirty to him) but it's a huge improvement over the green.  Maybe I can live with this for another year if nothing else breaks.
1

November 16, 2018
It might not feel like we've accomplished all that much since buying the house last summer.  What progress we have been able to make comes during naps and after the kiddo is down for the night.  But despite having to work in nap-sized increments, we have been able to get quite a bit done.  Take for example the house paint.  The siding was rough shape.  A few more years and we would not have been able to salvage it. Before - Rust colored stain needed a fresh coat years ago After-Paint provides much better protection for the brittle pine siding. Before After  Garage Before - Original combed cedar siding was in terrible shape after years of mistreatment. Garage After - It looks better, but the siding needs to be replaced.  The new paint will buy us some time until we're ready to tackle that project. Stable Before - Probably hadn't been painted in 20+ years. Stable After - It took 8 gallons of paint for a 16x30 structure. Someday I might get around to posting a photo tour of …
Post a Comment
Read more