September 04, 2015
It’s been two years since I walked into our house for the first time.  It was Labor Day weekend and we were scheduled to close on the house in an hour.  I had never been in the house until closing day.  Homes in our price range were selling quickly and I was living 70 miles when Luke found a newly-listed ranch house.  He looked at it during his lunch hour the following day and put in an offer immediately.  The house had been on the market for 48 hours when our offer was accepted.  It was not the only offer; it wasn’t even the only full price offer so I think we made the right choice in such a quick decision.  I had some pictures of the house, but I didn’t actually see it in person until closing day five weeks later.  When I walked in the door for the first time it was a crowded and ugly as I had expected from the pictures. 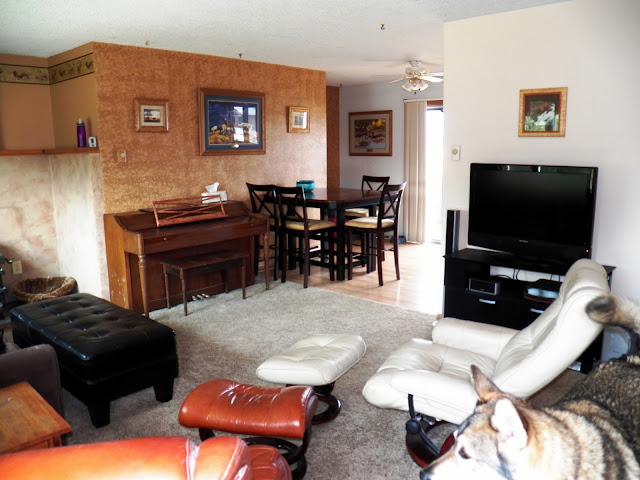 The rooms were small and boxy, the finishing materials were cheap and the whole house was dirty and dated.  I had been prepared to hate the house and I was not disappointed.  But two years have made a difference.  I still miss living in Butte and the beautiful house we had there, but I don't mind coming home to this. 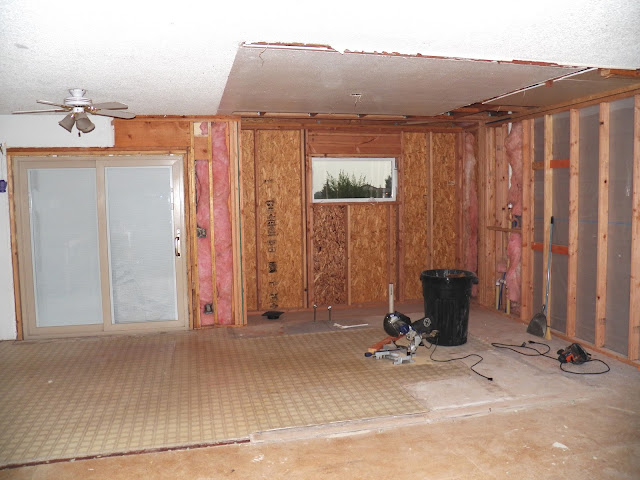 Yes, it's a bit of a disaster, but the house feels much more open and cheery than it did before.  Maybe it's because there's hope for it now. 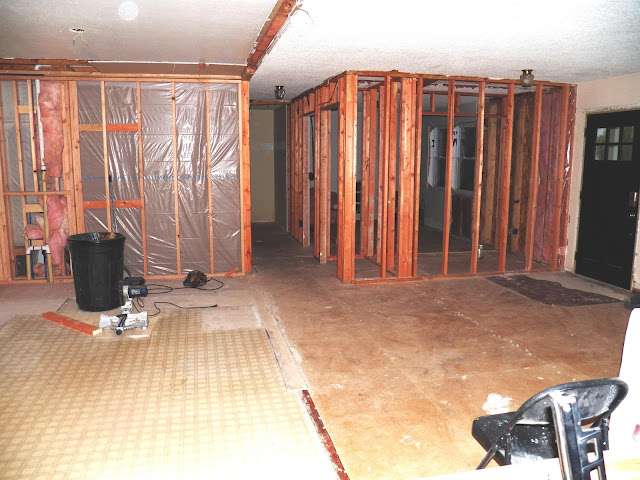 The narrrow, walled-in stairwell is now open and nearly a foot wider. 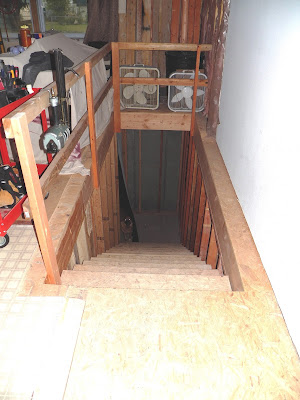 The wasted space in the master bedroom is gone 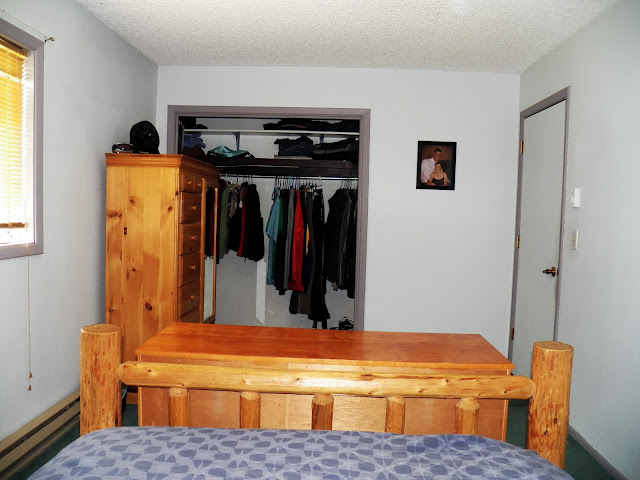 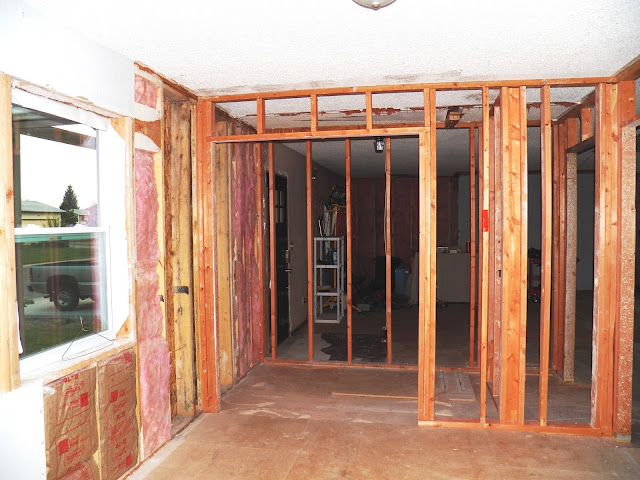 Since the upstairs us pretty much the gutted shell of a house we have moved into the basement.  Our current bedroom isn't pretty, but being below ground keeps the room nice and dark for some great sleep. 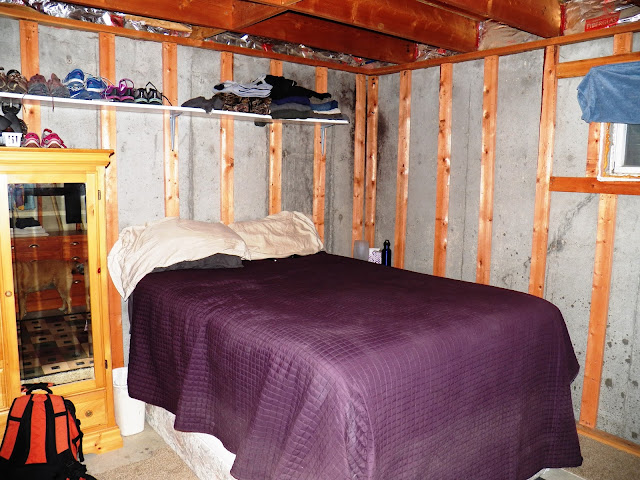 I temporarily converted the future bathroom into our kitchen.  Thanks to the toaster oven and electric skillet we're not starving yet. A few leftover pieces of shower tile on top of the folding table make for a decent prep surface.  A 2x4 and a chunk of house wrap keep the toilet separate from the kitchen 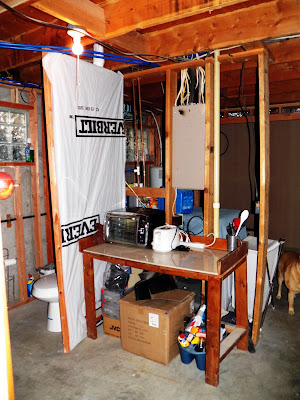 These cabinets will eventually end up in our laundry room but for now they make a great pantry and coffee station. 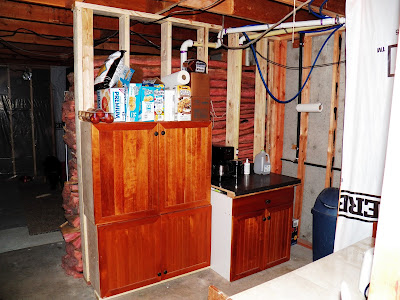 The living quarters aren't great, but they'll do for the next few months. 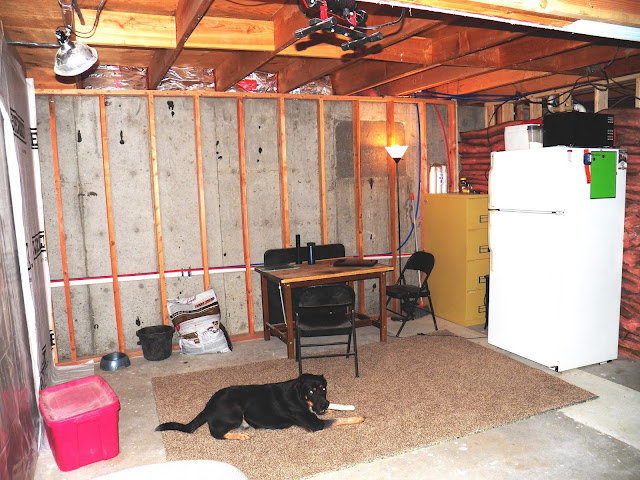